For those of you who are unfamiliar with the story of my life, let me inform you that I was forcefully hospitalized in 2008 when I was at the university in JKUAT and again in 2011 when I was at the University of Nairobi (UoN). The reason for my admission to hospital was because of going astray, something I have explained in detail in some of my previous stories on this blog. I am sure my father sympathized with me in those two instances as he watched guards subdue me and force me to lie down on a bed so that I could be injected with a drug that drove me to sleep. They were such dramatic scenes.

Sometime in 2011 or 2012 (can't recall the exact year), I contemplated suing JKUAT and UoN for having forcefully admitted me to hospital - experiences that made me gain weight and lose enthusiasm for living. I thought if I could take those two universities to court and win my case, I could end up being paid huge sums of money which could help solve some of my financial problems.

Encouraged by that thought of being awarded money, I began to take steps of suing the universities. I approached a high school classmate of mine named Lawrence Sikuku, who was then pursuing Medicine & Surgery at UoN, and requested him to lend me a decent suit for wearing during court cases so that people would know I was a respectable person, and not just a fool from the village. Lawrence replied to me that he didn't have a suit he could lend me and went on to say that he was surviving on a few clothes in his wardrobe.

Around that time I approached Lawrence for help, I also contacted two friends of mine who were lawyers to inquire on the way forward in suing JKUAT and UoN. One of them informed me of an organization in Nairobi that offered free legal services for poor people who have been dealt with unjustly.

On mature reflection, I am glad that I gave up suing the two universities I have told you about. For one thing, I am sure if my case had seen the light of day, I would have been featured in the newspapers and thus bring shame to myself and my family. Then, I don't think I would have won the case because as I see it now, the two universities acted appropriately by taking me to hospital.

You see, it was foolish of me to stop attending classes at JKUAT in 2008 without communicating with anyone. I wonder what I would have done had I ran out of money while hanging around the university. So the JKUAT authorities were wise to take hold of me and take me to hospital. Same case with the UoN authorities.

And that brings me to the point I am trying to make: that I behaved immaturely not only in those two instances in 2008 and 2011 when I went astray at JKUAT and UoN but also in numerous other occasions over the past twelve years. And I behaved immaturely in spite of having been a grown-up.

Like in 2011, a few months after I was discharged from UoN clinic, I became unreasonably mad with the world after my family and several friends of mine failed to send me money for producing a song that I had plagiarized from a Catholic hymn. Imagine I ran away from home and sent people messages at night that I was going to commit suicide. The ploy didn't work because nobody came to my aid.

These days, I am making it my ambition to conduct myself with maturity by minding my own business, by listening to criticism with an open mind, by not overreacting to minor provocations, by not permitting other people's weaknesses to disturb my peace of mind and by trying to discern a lesson in every setback. Recently when going through a rather trying moment, I asked myself, "What would Jesus do if He were in my situation?" I intend to continue asking myself that question in the future during hard times. So help me God.

***************************
RECOMMENDATION: If you've enjoyed this story on maturing up, you might also enjoy another one I wrote sometimes back on "What Freedom Entails". Just click on that link in blue to dive straight into the story.

Not Worrying What People Think 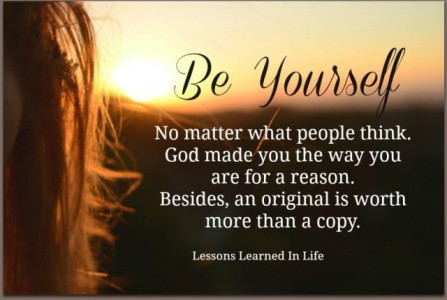 With permission, I have extracted this picture-quote from a blog called Lessons Learned in Life. All rights reserved worldwide.

One lovely night in 2008 when I was at the university in JKUAT, I struck a conversation with a pregnant lass I met at the university library. The lass was not only beautiful and attractive but also honest and friendly. For how else can you explain that she opened up to me about her life after only a few minutes of conversation?

Even though I didn't find it wise for the lass to get pregnant while still an undergraduate student at the university, I loved the advice she gave me as I escorted her to her room of residence. She advised me to do my own things without worrying what other people think about me.

To be honest, I have never spared a minute to reflect on that piece of advice I received from the lass. But today, I have decided to heed it after realizing that much of the guilt I have been feeling over the past two years has been as a result of worrying over what others think of me.

Yes, I have at times wallowed in guilt after getting concerned with what others think of me. At other times, I have found myself remembering some of the foolish deeds I did in the past or lies I told and then becoming worried that others could be talking about all those foolish deeds I did and the lies I told. Such kind of thinking has been robbing me of inner peace as well as happiness.

Coming to think of it, I see no reason why I should be bothered about what others think of me for two reasons. First, nobody is perfect. And because nobody is perfect, all other people have had their own share of mistakes which led them to do foolish things, just like I did. Secondly, many people out there are having problems that are troubling their minds. For that reason, they never have time to think about me, let alone talk about me.

In my readings, I have come across pieces of advice from several authors touching on the topic of worrying about what others think of us. Like in his internationally acclaimed book The 7 Habits of Highly Effective People, Stephen R. Covey tells us that as we become more effective, we will get concerned not with what others think about us but with what people think about themselves. Such kind of change in thinking will bring us a sense of peace and exhilaration, says Covey.

Then in his best-seller How to Get from Where You Are to Where You Want to Be, Jack Canfield informs us that others aren't thinking about us. I am not sure if that is accurately true but believing so can help us reclaim time wasted on worrying about other people's opinion of us.

So as from today, I will strive not to worry about people's opinion of me. Instead, I will focus my energies on improving myself mentally, socially, physically, spiritually and financially. It's high time I shifted gears from getting concerned with what mere mortals think about me to what God thinks about me.

My dear reader, I also beseech you not to worry about what others think about you. You will never be completely free if are constantly bothered by people's opinion of you. Just be yourself, do your own thing and let God take care of the rest.

Well, I venture to predict that as we climb the ladder of success, we will attract harsh critics who will be jealous of our success. That is the price people pay for success. And it has been that way throughout the ages. Even the famous young Jewish rabbi named Jesus Christ had detractors who tried to tarnish his name in his days here on Earth.

In modern times, I have seen people hurl insults at my role models. A few years ago for instance, I came across an abusive comment on the internet about my hero Ben Carson who was then gunning for the United States presidency. The comment read, "This so called brain surgeon needs a brain."

Such are the kind of harsh criticism that we will receive as we climb the ladder of success. And if it ever happens to me, I will take to heart the following words of former U.S. First Lady Michelle Obama:

One of the lessons that I grew up with was to always stay true to yourself and never let what somebody else says distract you from your goals. And so when I hear about negative and false attacks, I really don't invest any energy in them because I know who I am.

Pretty powerful words, aren't they? I urge you to also implement them in your thinking when someone says condescending remarks aimed at hurting you. After all, why should you be concerned with other people's opinion of you if you know who you truly are?

*************************
RECOMMENDATION: If you've enjoyed this story on not worrying what people think, you might also enjoy another one I wrote sometimes back on "Not Fearing the Crowd". Just click on that link in blue to dive straight into the story.