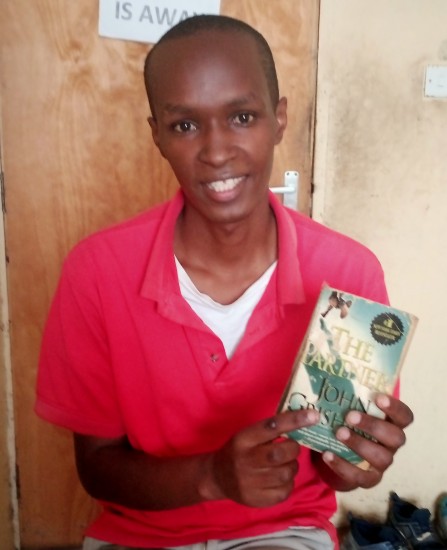 This is me today in my den holding John Grisham's
The Partner, an absorbing thriller I read earlier on this year.

Back in the '90s when my siblings and I were growing up, our Dad used to encourage us to read novels. He bought for us plenty of novels which he probably thought would help us fare well in school. Despite his efforts to have us read novels, only my eldest brother Joe Kagigite became an avid reader of novels. I would observe Joe exchanging novels with his friends who visited him at home in those days.

One afternoon in 1997, I passed by Joe's room at home and found him with one of those big novels that he read. I picked the novel up, opened it and then burst into excitement after I recognized several words in it. So much did I feel excited at being able to recognize words in the thick novel that I boasted about it to my other siblings that day. Little did I know that there is more to reading novels than recognizing words; we have to understand the story that the author is narrating.

In spite of Joe having been an avid reader of novels when he was in high school in the late '90s, he didn't manage to score an 'A' or an 'A-' in English in the final high school exams known as KCSE. That makes me wonder if he really ever understood the novels he read. Later on in the year 2010 when Joe offered me a lift in his car as we headed to his house, he told me the novels he read in the '90s have made him more creative in his work. So it appears they were never a waste of time for him.

As for me, I didn't start reading novels till 1998 when I was in Standard 5. But unlike Joe, I only went for the thin novels such as Daniel Defoe's Robinson Crusoe which made me fancy being stranded in an island like Robinson Crusoe. I continued reading those thin novels occasionally as my primary school years rolled by. Looking back, I find it was wise of me to have only read the thin novels when I was in primary school as I was still too young to understand the thick ones.

When I joined Starehe Boys' Centre in 2002 for my high school education, I read medium-sized novels by African writers but only over school holidays because I was too focussed on excelling in academics to read novels at school. Furthermore, it was an offence at Starehe to read novels in class. I remember during one night prep in 2002, Gilbert Kimani - the then school captain of Starehe - came into our class to check if there was anyone with novels. He didn't find any.

You know what? During my final two years in high school at Starehe, I stopped reading novels apart from Chinua Achebe's A Man of the People which I studied because it was a set book for our 2005 KCSE exams. I only read that novel as I feared reading other novels would take up space in my memory that I wanted to reserve for the academic knowledge I needed to excel in school. Sometime in 2004 when Dad urged me to read novels, I pleaded with him to let me read only academic books. I almost cried while pleading with him to leave me alone to study what I thought was fit for my memory.

It seems to me now that my fear that reading novels would take up space in my memory was unfounded because when we were sitting for our KCSE exams in 2005, I spotted my classmate Brian Nalyanya reading a novel during a night prep. Nalyanya went ahead to emerge among the top 10 students in the country in the KCSE exams. He scored an 'A' in all the subjects he sat for, including English which I got an 'A-' in despite having applied myself to studying only the set books. When I was in Starehe Institute in 2006, a female teacher informed us during one lesson that Nalyanya wrote some of the best KCSE compositions. And she was quick to tell us she didn't know who that Nalyanya was.

After I finished high school in 2005, I never became an avid reader of novels like the way my brother Joe Kagigite was when he was in high school. Imagine between 2006 and 2019, I only read about five novels which I regrettably never kept in my room for future re-reading. Boy, how I would have loved to have those novels in my room just to take pride in knowing I have read them!

This year, I have started reading novels avidly - the novels that Dad used to buy for us when we were growing up here at home. Unlike before, I am now reading even the thick novels and keeping in my room the ones which I find spell-binding. Why, you may ask, have I chosen to read novels avidly? Because I believe reading novels improves our thinking and communication skills, and ultimately the quality of our lives. That's all I am saying.

************************
RECOMMENDATION: If you've enjoyed this story on reading novels, you might also enjoy another one I wrote earlier this year on "How a Trip Helped Me". Just click on that link in blue to dive straight into the story. 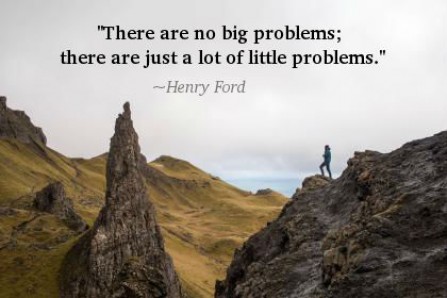 I suppose everyone once in a while suffers from what I call the "mosquito" problem - that is, a problem that appears small and inconsequential but can cause embarrassing or devastating consequences just like the way a mosquito appears small but can inflict such life-threatening diseases as malaria. (When I talk of mosquitoes and malaria, I am reminded of an emperor who called himself "Alexander the Great" yet he was killed at a young age by a mosquito.)

For some, the "mosquito" problem could be dressing smartly and then forgetting to zip up the fly. For others, it could be taking great effort to oil their bodies with expensive lotion and sweet-smelling perfumes only to be told that they have bad breath. As for me, my "mosquito" problem has been forgetting where I keep my things. It is a problem that has featured in my dreams at night. Over the past few years, I have had several dreams in which I have been frustrated by my inability to recall where I have placed something important.

And I have had this "mosquito" problem for quite a long time. Back in 2008 when I was on a university holiday, a farmhand who was employed here at home and with whom formed a close friendship, observed I had that weakness of misremembering where I placed things. He brought that weakness to my attention and informed me that he also had had a similar problem. The two of us devised an exercise that could help me overcome that weakness of forgetting where I placed things.

This was the exercise: I wrote numbers 1 to 10 on different pieces of paper and then put the papers in various locations at home before heading to church at All Saints' Cathedral in Nairobi for choir practice. On coming back home from church, I would fetch the pieces of papers starting with the one I had written number 1 on it and take them to the farmhand one by one.

Although I succeeded in remembering where I had kept the pieces of paper in the few times we carried out the exercise, I don't think it helped because on several occasions in the past five years, I have forgotten where I have kept my things. Allow me to tell you of two such occasions. Only two.

One evening in 2016, I prepared porridge with my electric heater and filled some of it in my cup. Then I got sidetracked by my phone after which I decided to sip my delicious cup of porridge. But alas! I couldn't see where I had kept the cup of porridge! I searched for it in every nook and cranny of my room to no avail. It was like my room had been invaded by devils (what my fellow countrymen call "mashetani") that had made away with the cup of porridge.

Later on that evening, I found the cup in the living room of our mansion and realized I had left it there when I went to talk with my parents. And I hadn't filled it with porridge as I thought. What a poor memory I had!

The other occasion when I forgot where I had kept something happened about three weeks ago when I went to the living room of our mansion to socialize with my eldest brother Joe Kagigite who had visited us with his family. Just in case any idle moments arose while socializing with Joe and his family, I carried with me Billy Graham's The Secret of Happiness to re-read during those idle moments.

I had a wonderful time talking to Joe and his family while occasionally going through the passages I underlined when I first read the Billy Graham book I have mentioned to you. As I was conversing with Joe's children, I headed to the kitchen to check something for them. And lo! When I went back to the living room, I couldn't locate where I had kept the Billy Graham book. That confused me a bit, something which bothered me because I am very sensitive to confusion these days.

Yes, my inability to recall where I keep things has been my "mosquito" problem. I fear that the "mosquito" problem could cause me shame in the future in the same way Alexander the Great was brought down by a mosquito. How? Maybe I will cut my fingers while operating a farm machinery. Or maybe I will forget where I have kept car keys before heading for an important speaking engagement.

Since I have faith in the power of prayer, I have asked God to help me overcome this "mosquito" problem of mine. And because I believe in the non-biblical saying that God helps those who help themselves, I am making a conscious effort to remember where I keep my things including such minor possessions as my biros and bookmarks. With such kind of effort and with God's help, I know I shall overcome my "mosquito" problem sooner rather than later.

****************************
NEW! NEW! NEW! For those of you who missed my social media update two days ago, let me take this opportunity to inform you that I have produced a new song that is available in the videos' section of this blog. Just click on the "videos" link on the menu at the top of this blog to listen to the song.