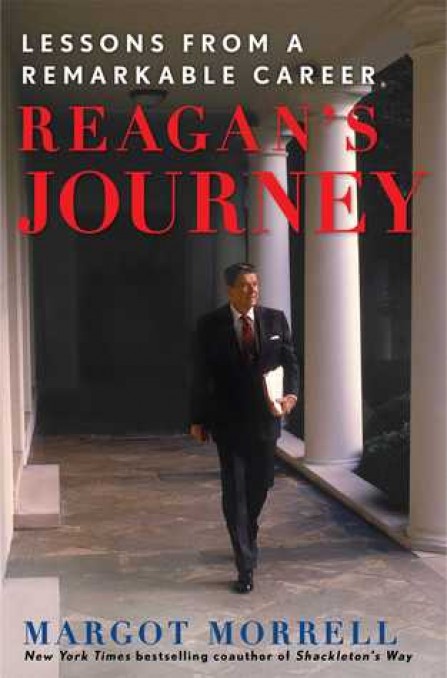 This is the cover-page of Margot Morell's delightful
Reagan's Journey: Lessons From a Remarkable Career that I once borrowed from the United States Embassy library in Nairobi.

That evening as I sat in a matatu on my way home from the United States Embassy library where I had borrowed the biography I have told you about in the caption of the photo above, I found myself admiring the book's cover-page photo of Ronald Reagan walking on a cloister that looked like one of those no-visitors-beyond-this-point corridors. I was acting like some high school teenagers who drool over photos of Hollywood movie stars.

And that biography sparked an interest in me to read more on the life and times of Ronald Reagan. So much that I googled his quotes and learnt more about him in a 2004 Time magazine commemorative issue of Ronald Reagan after he passed on at a good old age of 93.

Of the quotes by Reagan that I googled, the one remember most was his opinion on socialism: the system of government used in the Soviet Union that was the main rival of the United States during the Cold War that dominated much of the latter half of the 20th century. Ronald Reagan said that socialism can only succeed in two places: in heaven where they don't need it and in hell where they already have it.

And Ronald Reagan did have a remarkable career for shizzle. He helped the United States win the Cold War that could have potentially led to a nuclear holocaust. He was also a devoted family man as his wife Nancy reported in the 2004 Time magazine commemorative issue I've told you I read.

Having now learnt much about Reagan, I have been able to glean the following qualities that made him a great president and a good family-man: optimism, faith in God, sense of humour, love for mankind, kindness and a romantic nature. Let me briefly discuss each of those qualities.

On his optimism and faith in God, Reagan believed deeply in the Bible as the inerrant Word of God. So deep was his faith that he never took off in a plane without uttering a prayer. And he believed that God has a purpose for everyone; that we might know that purpose now but eventually we will know. That kind of deep faith in God accounted for his optimism because he never saw things darkly; he believed everything happens for a reason.

Like when he was almost killed in 1981 by a would-have-been assassin, Reagan prayed in the hospital where he was admitted. A friend visited him in that hospital and told him, "Reagan, God was certainly on your side that day you were shot." To which Reagan replied, "Yes I know, and I have made up my mind that all the days I have left belong to Him."

On his sense of humour and love for mankind, Reagan had an uncanny ability to tell stories of sparkling wit without repeating himself. Rhetoricians have labelled him as "The Great Communicator" because he spoke with confidence and conviction. And he loved meeting and interacting with people. No wonder he was voted in this decade as the most efficient American president since World War 2.

On his kindness, Reagan always advised his children, "If you go into a store and feel that the clerk is being rude, stop and think that she may have had a tough day, and put yourself in her shoes." And he once counselled his son, "A gentleman always does the kind thing."

His optimism, faith in God, sense of humour, love for mankind, kindness and a romantic nature - let me now discuss on that last character trait. Reagan adored his wife Nancy with whom he regularly danced with in the glare of media cameras. He always sent his mother-in-law a gift on Nancy's birthdays.

At one time when he was taking a leisurely walk, Reagan passed by a garden of rose flowers. He bent over to pick one, and the Secret Service agent accompanying him reminded him it wasn't his house. He looked stricken and said, "But I want to give it to my lady!" He picked it and took it to his wife Nancy.

There you have them: that is, the lessons I learnt from the life of Ronald Reagan. I am striving each day to cultivate in myself those character traits of Ronald Reagan that made him a great president and a good family-man. And hopefully, I too will have a successful career as a writer, a farmer, a musician and a public-speaker in addition to having a wonderful family. So help me God.

*************
RECOMMENDATION: If you've enjoyed this story of mine on lessons from Ronald Reagan, you might also enjoy another one I wrote some times back on "Lessons from Ben Carson". Just click on that link in blue to jump straight into the story.

How God Answered My Prayer 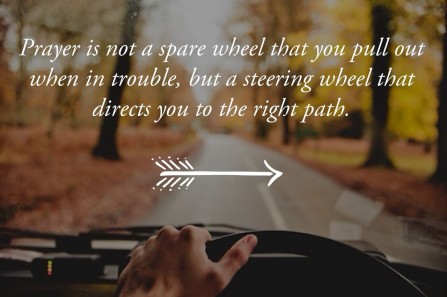 If you know the genuine copyright-holder of this photo, please let me know so that I can acknowledge him and link my audience to his website.

The memory of those early hours of the night remain indelibly printed on my mind. It was on a Thursday in 2008 - that's roughly ten years ago. I had gone for choir practice at All Saints' Cathedral in Nairobi when my fellow chorister Michael Njeru lent me his piano keyboard for me to practise hymns from the comfort of my home. As I left the cathedral with the keyboard in my hands, I began to worry what I would do with it when I reached my home-town of Kiserian.

You see, my home is about three kilometres from Kiserian Town and at that time, the now cheap motorbike riders (locally known as boda boda) had yet to begin plying the route. My worry sprang from a fear that I could get mugged as I walked home from Kiserian in those early hours of the night.

A decade earlier in the '90s when I was a child, I had been mugged by two boys as I walked on that route from Kiserian to home on a Sunday afternoon. The boys approached me from behind, snatched from me in a split-second a carton I was carrying and ran away with it.

And here I was on a Thursday night in 2008 about to walk on that same route while carrying the piano keyboard that my fellow chorister Michael Njeru had lent me. If I got mugged, I could destroy the trust Michael had of me. And how I would have hated to part with such a precious possession as a piano keyboard!

Because I had been taught the power of prayer, I decided to turn my predicament over to God through prayers. So as I walked from the cathedral to the matatu station where I would board a matatu to Rongai Town, I asked the Lord to provide a solution as to what I would do with the piano keyboard when I reached Kiserian Town.

Guess what! When I reached Rongai Town and boarded another matatu that was to finally take me to Kiserian, I found myself in the same vehicle with a neighbour called Prof. Nyagah. I greeted him after which we exchanged a few pleasantries.

And guess what again! After we arrived safely in Kiserian Town, Prof. Nyagah hired a taxi and asked me to get inside. Then he had the taxi driver drop me right at the gate of our home. Yippee! I had been saved from the possibility of getting mugged!

As I alighted from the taxi, I thanked Prof. Nyagah for his generosity but I didn't let him know that God had used him to answer my prayer. And as I reflect on those early hours of that night during which God heard my prayers, I am feeling encouraged to turn my concerns and cares over to God. Adieu!