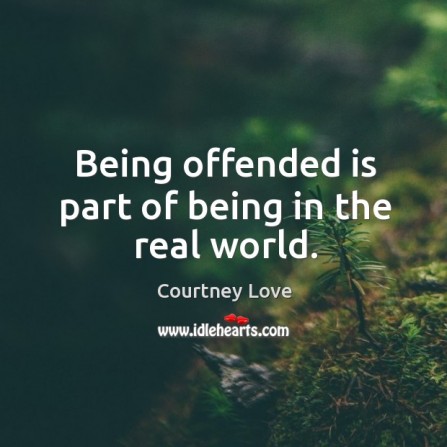 With permission, I have extracted this picture-quote from Idlehearts.com. All rights reserved worldwide.

If there are people who offend me in this world, it is those who steal my property, cheat me of my money or don't keep their word. Today, let me tell you about one such person who offended me on Friday. His name is Freddy but allow me to call him a fool, for that is all he is.

Last week, I composed a hymn which I wanted to produce in a music studio. So on Thursday morning, I contacted the fool I have told you about. The fool is a music producer and the good thing about him is that he charges me very cheaply compared with other producers I have approached. But going by how grossly inefficient he is, the old saying "when you pay peanuts you get served by monkeys" must be true.

When I phoned the fool on Thursday morning, he received my call. And after I informed him I had a song I wanted to produce in his studio, he asked me to send him a down payment. I sent the money immediately and shortly afterwards, we agreed that I would travel to his studio the following day: Friday, that is.

Excited at the prospect of producing a song, I called the fool on Thursday evening to confirm with him that we would be meeting the following day. But alas! He didn't receive my call. About an hour later when I called him again, he still didn't pick my call. Those unanswered calls notwithstanding, I purposed to stick to my plans of travelling to the fool's studio the following day.

Come Friday, I woke up early in the morning as usual. I took a shower in preparation for the journey I was to make to the fool's studio. Because the journey was quite long, I left home at around 7.20am without waiting for our farmhand to prepare tea. As of the long journey, it comprised walking several kilometres of distance, boarding two matatus and riding in a motorbike. The journey was not only long but also expensive by my standards.

Guess what! When I reached the building that houses the fool's studio after about two hours of travelling, I found its gate closed. I called the fool to tell him I had arrived but he didn't receive my call. Being the patient young man that I sometimes am, I sat down next to the gate of the building and read a book I had carried with me.

As time rolled by, I phoned the fool again and again but he didn't pick any of my calls. And when I sent him an SMS, he didn't reply to it either. While waiting for his response, I suddenly remembered I had planned to have a haircut later that day. I decided to take advantage of the waiting time to have my hair done. So I stood up and walked around looking for a barbershop.

Having found a barbershop, I entered into it and had a haircut, all the while hoping that by the time the barber was done with trimming my hair, the fool would have contacted me. But alas! After I had had my haircut, I didn't find any message or missed calls from the fool. And mark you, that was more than an hour since I had arrived in the area.

Again, I went and sat down near the gate of the building that houses the fool's studio. After sitting down, I called the fool only to hear an automated voice that his line was busy. A few minutes later when I phoned him again, my call went through but he didn't answer it. That his line had been busy a few minutes earlier made me realize he was just ignoring my calls. And imagine that was after I had made a long and expensive journey to his studio. How offending!

Because of the curfew that has been imposed in my country in an effort to curb the spread of the coronavirus, I decided to head back home so that I would make my return journey while it was still daytime. That turned out to be a wise decision because the fool didn't contact me for the rest of the day. He had lied to me.

Well, I have come to take responsibility for my own happiness by not allowing other people's weaknesses to affect me. But yesterday every time I thought of how the fool had inconvenienced me by wasting my time, money and energy, I couldn't help but feel deeply offended. Why had he agreed to meet with me on Friday but fail to turn up? Why had he not called me in advance to tell me he couldn't honour our appointment? And why had he refused to pick my calls and reply to messages on Friday?

So offended did I feel that yesterday afternoon, I sent him a message demanding my money back. This time, he replied to my message without apologizing for inconveniencing me. He promised to refund me my money but a day later, I am yet to get even a single coin from him. Today morning, it dawned on me that his promise to refund me my money was another lie given the way he has been beating around the bush every time I bring up the issue. So I have left him alone and let God deal with him for conning me my money and for not keeping his word.

That fool offended me for shizzle. Happily, I have now recovered from the bitterness. And even though he made me lose money, time and energy that I would have put into better use, I am glad to report that I am now a wiser person. Next time, God willing, I will be more careful in my business dealings.

************************
FEEDBACK: Would you be so kind as to offer your feedback on the stories I post on this blog? Just click on the "Feedback" link on the menu at the top of this blog and share your thoughts with me. Thanks in advance for your comments.

Wisdom From a Departed Friend

This is my friend David Musyoki who passed away last week. Several years ago when I first viewed the photo above, I envied the way Musyoki had kept his weight in check.

David Musyoki was a schoolmate of mine at Starehe Boys' Centre where I had my high school as well as college education. He was a year ahead of me and he boarded in a dormitory in which he rose through the leadership ranks to become its captain in 2004. Although his dormitory was next to mine, I can't recall ever interacting with Musyoki during our Starehe years.

It wasn't until the previous decade that I got to be friends with Musyoki through Facebook. I remember sometime in 2011 when I made it public on social media that I was intending to vie for my county's senatorial seat in the 2013 Kenya's General Elections, Musyoki sent me a message telling me that he could introduce me to several influential contacts in my county. So he shared his phone number with me. For some reasons though, he never hooked me up with those influential contacts he had told me about.

Over the years, I came to like Musyoki because we both shared a faith in Christ and an interest in reading inspirational quotes. I noted how he would regularly post enlightening quotes on his Facebook wall. Among the numerous quotes that I read from his wall was the following one by St. Francis of Assisi: "Preach the gospel at all times. And when necessary, use words."

Sometime in 2016 while going through my Facebook news feed, I came across the following words of wisdom from Musyoki:

One of the most amazing characteristics of kings in the Bible is the way they kept a book of remembrance. It was when King Ahaseurus opened his book of remembrance that he rewarded Mordecai for saving his life. It was when King David opened his book of records that he rewarded Mephibosheth son of Jonathan his covenant friend. God also keeps a book of rewards. It's very important that we stop keeping records of those that hurt us and start keeping records of those that positively influence our lives. They are the destiny helpers you must remember to appreciate in your lifetime. It could be a school teacher that inspired you when you almost dropped from school due to bad grades. An uncle who trained you in school. A mentor that guided you through a life crisis or a friend that loaned you some money to pay some bills. Document their names and ensure you remember them someday. It's wisdom to remember.

Those are powerful words of wisdom, aren't they? I so loved them that I saved them in my laptop for future re-reading. Last year when I re-read them, I thought Musyoki had probably copied the words of wisdom from somewhere in the internet and pasted them on his Facebook wall. So I googled them up in an effort to find their genuine author. But alas! I didn't find the words anywhere else in the internet. It seems Musyoki authored them himself. Actually, those words of wisdom must have been Musyoki's given the grammatical and punctuation errors I have had to correct while quoting them above.

As I have said, Musyoki and I shared a passion for reading motivational quotes. It was therefore no wonder that in December 2015 when I posted on my Facebook wall a series of instructions about living, Musyoki later on demanded to know from me where I had sourced the instructions from. Being the streetwise young man that I am becoming, I charged him a Ksh. 200 consultation fee. He did send me the money after which I disclosed to him that I had extracted the instructions from H. Jackson Brown Jr.'s delightful Life's Little Instructions Book.

Then one evening in 2018, Musyoki informed me via Whatsapp that he and some of his friends had started an organization for mentoring young people. He asked me if I was willing to be part of the organization. Because I still had to put my life in order (especially financial-wise), I didn't join the organization. My only regret is that I wasn't kind enough to reply to Musyoki's message, stating why I couldn't get involved in his organization. I just ignored him. And that message he sent me on that evening in 2018 turned out to be the last time we communicated.

Guess what! Late last week when I entered Facebook to catch up with news from friends, I was taken aback to hear that Musyoki had passed on after a brief illness. How unfortunate! His untimely demise has reminded me of how quickly those we cherish can be snatched from us by the cruel hands of death.

One acquaintance described Musyoki as a brilliant soul, something I agree with. And my friend Kennedy Miruka eulogized Musyoki as a person who was "authentic in love and genuine in character". As for me, I will remember David Musyoki as a wise man gone too soon. May his soul rest in eternal peace.

****************************
RECOMMENDATION: If you've enjoyed this story of mine on wisdom from a departed brother, you might also enjoy another one I wrote two years ago on "Bidding a Friend Farewell". Just click on that link in blue to dive straight into the story.