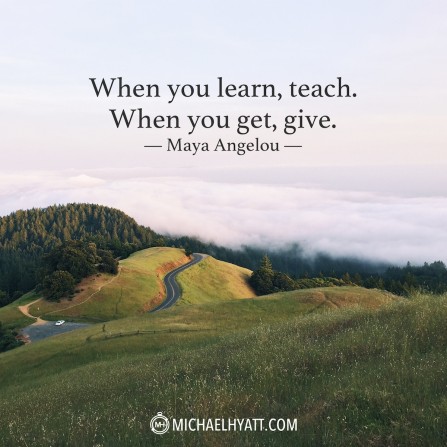 With permission, I have extracted this picture-quote from the blog of Michael Hyatt. All rights reserved worldwide.

A story is told in the Bible of a boy who attended a crusade led by the young Jewish rabbi, Jesus Christ. Before leaving his home for the crusade, the boy packed two small fish and five loaves of bread for lunch. The crusade progressed swimmingly with Jesus speaking gems of wisdom and performing miraculous deeds that amazed the crowd that had gathered around him.

When evening came that day, the disciples of Jesus were at a loss as to what they should do with the crowd that had become as hungry as a hunter. They suggested to Jesus that he disperses the hungry crowd of people to their homes. But Jesus asked them if there was anyone in the crowd with food. It turned out that the boy who had carried two small fish and five loaves of bread was the only one with something to eat. How wise it had been for him to carry some food!

The disciples approached the boy and requested him to share his lunch with Jesus. Being wise, the boy willingly gave out his fish and bread to Jesus. And guess what! Jesus multiplied the two small fish and five loaves of bread to a large amount that was enough to feed the crowd. Even after the crowd had eaten enough, there was still some fish and bread left which everyone in the crowd took home.

I am sure the boy who shared his lunch with Jesus took to his home more fish and bread than he had carried to the crusade that day. And when he reached home with a lot of fish and bread in his hands, his mother must have prodded him into telling her more about the events of that day and how Jesus had multiplied two small fish and five loaves of bread. It truly was a miracle.

Don't get me wrong: I don't mean to say I share everything I have. No. There are some things I never give out to others. My toothbrush is one of them. My favourite books are another, for I like keeping them in my room for future re-reading.

One of the things I passionately share with others is my knowledge. I love sharing my insights, learnings and experiences with people through this blog. And my greatest joy these days is when someone out there appreciates a story I share on this blog.

I have come to discover that knowledge is like money in that it means little when we just accumulate it but becomes meaningful and fulfilling when we put it to use and share it with others. And the beauty of sharing knowledge is the clarity it brings to our thinking.

As I grow older and wiser, I will continue sharing my insights, learnings and experiences with others. I am particularly looking forward to when I will be in my eighties, God willing, because I will then have amassed a lot of insights on life which I will share with the young generation like the way a Kenyan billionaire named Chris Kirubi does. Allow me to tell you a little about Chris Kirubi.

During my high school years at Starehe Boys' Centre, there was an evening Chris Kirubi came to address us in the assembly hall. All I remember is him telling us about the companies he had invested in. Because he sounded boastful in his speech to us, the impression I had of Chris Kirubi after that evening was a showy billionaire who just loves bragging about his wealth.

But alas! After following Chris Kirubi on Twitter a few years ago, I was pleasantly surprised to find him a humble person who likes sharing his knowledge with others, especially with young people beginning their entrepreneurial journey. He draws some of his advice from his illustrious career as a businessman, a career that has had its share of ups and downs. Such is the kind of advice I look forward to sharing when I am in my eighties, God willing.

My dear reader, I beseech you to also share your knowledge with others. If you've overcome a challenge, successfully set up a business or seen God answer your prayers, share your insights and experiences with the fainting multitude. You can write a book, launch a blog, compose a song, become a newspaper columnist or host a show on radio or television. By sharing your knowledge, blessings will come to you multiplied just like it happened to the wise boy who gave out his two small fish and five loaves of bread to Jesus. Adieu! This is me at home today, trying to pose on camera as a mature and balanced young man.

When I was applying to four top American Colleges in 2006, I had one of my high school teachers describe me in a recommendation letter as "an exceptionally caring, mature and balanced young man who would add to your school in many ways". I borrowed that phrase in quotes from an informative book titled How to Get into the Top Colleges which I didn't read in full. As it happened, I wasn't accepted into any of the colleges.

Looking back, I don't think I was a mature and balanced young man. If I had been, I wouldn't have stopped attending classes at the university in JKUAT without communicating home. I honestly don't know what was going on in my head as I hung around JKUAT while my family worried sick about me - an immaturity I exhibited again in 2011 when I was at the University of Nairobi.

After I left the University of Nairobi in 2011, I continued behaving immaturely. Believe me when I tell you that I had a habit of running away from home whenever my family members failed to fulfil my demands, forgetting they too were having challenges of their own.

Like one Friday night in 2011 or 2012, I slept outside on our farm because of a disturbing issue I have forgotten. All I remember is me lying to Mum that I was from church when I went back to our house early the following morning which was a Saturday. Quick to discern that I was lying, Mum replied that I had been sleeping outside. She went ahead to complain to me that she would doze during the day while selling stuff at her grocery because of me having caused her a sleepless night.

Probably as a result of the way I had caused Mum a sleepless night, I felt terribly guilty that Saturday. It was like the whole world was rebuking me. When I went to church at All Saints' Cathedral in Nairobi later on that Saturday, I unburdened my guilt to a friend of mine called Jack who did nothing to assuage my feelings.

Then on another Friday in 2014, I tried to organize a family meeting to discuss how we could make productive use of our land. I kept sending messages to my family that Friday and when it became apparent to me in the early hours of the Friday night that they were unwilling to attend my meeting, I went to sleep outside, leaving our sick Mum all alone in the house. On going back to the house at around 11.00pm of that same night, I found my younger brother Symo unhappy with me. Symo thought it had been very immature of me to leave Mum alone. And he was right.

As I reflect further on my life in the past ten years, I have uncovered several other instances when I behaved immaturely. Like there was a time in 2014 when I gloated over the tribulations facing my friend James Karanja Maina who was put on the newspapers on a notice warning the public that he was no longer an employee of Keroche Breweries. Karanja's tribulations must have escalated as he was brutally murdered a year or two later.

Then there have been times I have judged others harshly, reacted in anger over minor issues, meddled with some of my friend's affairs, worried over little things, allowed others to hurt my feelings and sent abusive messages to friends. An immature young man I have been.

Now that I have grown wiser, I am striving to be the mature and balanced young man that I had one of my teachers say of me in the recommendation letters I sent to American colleges in 2006. I am endeavouring to conduct my affairs responsibly, to empathize with other people's suffering and to listen to criticism without allowing it to affect my inner peace. Likewise, I urge all young people out there to behave in a responsible manner.

I especially have a message for teenagers still living with their parents - please don't be too hard on your parents when they fail to live upto your expectations. Understand parents are people too. They also have pressures. While you're worrying about your friends, they're worrying about their bosses. Like you, they have days when they get offended at work. They sometimes cry; they get their feelings hurt; and they don't always have their act together, just like me and you. So mature up and understand them.